Tonight, Rafael del Pino, President of Ferrovial, has received the Business Leader of the Year award from the Spain-US Chamber of Commerce in recognition of “his leadership and foresight at the helm of the company.” Specifically, the Board of Directors of the institution recognized Del Pino for “his extensive professional career, his strong commitment to the U.S. market, and his significant contributions that have elevated the firm’s status as a major worldwide industry player.”

In addition, Alan Solomont, Chairman of the Chamber and former U.S. Ambassador to Spain, emphasized that under Del Pino’s management, “Ferrovial has achieved a significant presence and recognition in the United States.” Solomont congratulated Del Pino “for setting a leading example in the area of corporate social responsibility, and for making the development of sustainable infrastructure one of the firm’s key strategic areas, thus shaping Ferrovial into an international model for designing and providing solutions that improve efficiency, usability, and sustainability of infrastructures and cities. Ferrovial is part for the twentieth consecutive year is part of the prestigious Dow Jones Sustainability Index.”

“Ferrovial has achieved a significant presence and recognition in the United States”, said Alan Solomont, Chairman of the Chamber and former U.S. Ambassador to Spain

The award ceremony took place in New York during the 2021 annual Gala of the Spain-US Chamber of Commerce. The event was attended by more than 300 representatives of politics, business and finance from both countries. The attendees included Kathy Hochul, Governor of the State of New York, the Ambassador of Spain to the United States, Santiago Cabanas, and the Chairman of the Chamber and former U.S. Ambassador to Spain, Alan Solomont. 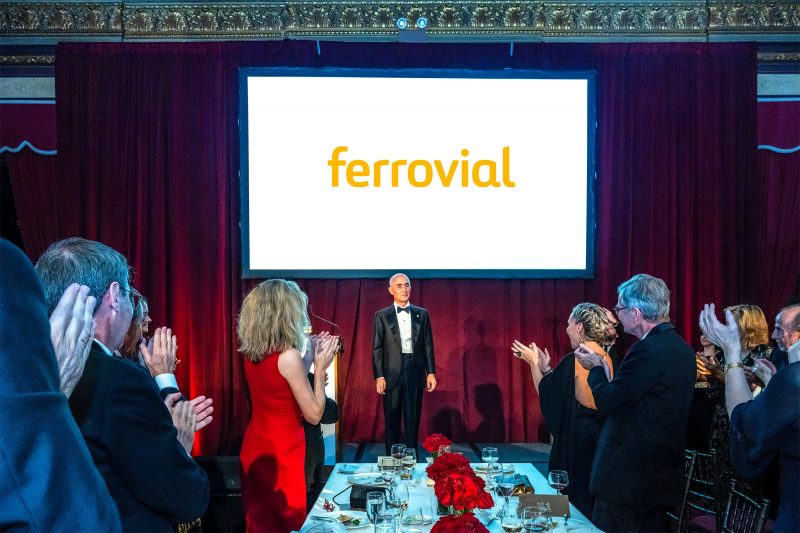 During his speech, Rafael del Pino expressed his gratitude for the award, highlighting the importance of the United States in Ferrovial’s strategy and business, noting that it is a country committed to infrastructure.  “We feel fortunate to have undertaken about 20 billion dollars in new infrastructure projects in the United States alone over the past 15 years,” the Ferrovial executive chairman noted. “Projects that improve safety and mobility on the road for millions of drivers and users, while providing work for hundreds of contractors and subcontractors,” he continued. “All while providing more than 1 billion dollars in construction work to Disadvantaged Business Enterprises, helping them achieve the American dream.”

“We feel fortunate to have undertaken about 20 billion dollars in new infrastructure projects in the United States alone over the past 15 years,” the Ferrovial executive chairman noted.

Rafael del Pino shared some of his personal experiences with the United States, where he studied his MBA at MIT, and spoke about the inspiration exerted by his father, who founded Ferrovial in 1952, and former directors Claudio Boada, José María López de Letona, and Juan Antonio García Díez. He also shared the award with Ferrovial employees who “have created one of the largest infrastructure companies in the world.”

Ferrovial in the United States

The United States is one of Ferrovial’s main markets. Last year it reported sales of 2,682 million dollars, 33% of the company’s total in proportional terms, and 124 million dollars of EBITDA, 16% of the total proportional integration terms. It operates through Cintra, Construction Ferrovial, Webber and Ferrovial Airports. With around 11 billion dollars of investment under management, its main projects include the Managed Lanes in the Dallas-Forth Worth region, consisting of the LBJ, the NTE, and the NTE35W; the I-66 in Virginia, and the I-77 in North Carolina. In construction, the company has been operating for more than 15 years in the country and has projects such as the I-35 in San Antonio and the I-285 in Atlanta. Founded in 1963, Webber is Ferrovial’s construction subsidiary in the United States, and is working on more than 40 projects in Texas and Georgia, including the Grand Parkway in Houston. On the other hand, airports have begun its landfill projects in Florida with the Palm Beach project. In the area of innovation, the company has recently renewed its agreement with Massachusetts Institute of Technology (MIT) in energy and mobility, which has been in place for more than a decade. It also has collaboration agreements with the University of Texas at Austin, among others.

About the Spain-US Chamber of Commerce

Founded in New York in 1959, the Spain-US Chamber of Commerce promotes economic relations between the two countries and has become one of the most important transatlantic business organizations. The Chamber is a non-profit institution that promotes bilateral trade and investment. It represents the interests of companies that have been established or are interested in establishing relations between Spain and the United States.

Ferrovial boosts EBITDA by 11.8% in the first nine months of the year to €521 million

Ferrovial sells Amey to a company controlled by One Equity Partners and Buckthorn Partners, for GBP 400 million