Airport infrastructure has always followed aircraft development. With the emergence of different aircraft models during the 20th century, airports have had to transform their facilities in order to provide an adequate service. This century will see a third generation of airports adapted for vertical take-off and landing (VTOL) operations due to the commercialization of the tiltrotor aircraft.

Although the patent takes us back to 1930, it was not until 1954 when a Tiltrotor flew for the first time. For the last decades, the military industry has been developing aircraft that can take off and land vertically as a helicopter does and, at the same time, fly like an airplane in order to achieve higher cruising speeds and ranges. But it is not until this year, 2016, when the US Federal Aviation Administration will most likely certify the first civil tiltrotor.

Technology has already evolved sufficiently to provide an aircraft that combines the best features of a helicopter and an airplane for ranges below 1,000 nautical miles (e.g., all western Europe). Although the existing tiltrotors’ seating capacity is still somewhat distant from the one that the wide body airplanes provide nowadays, tiltrotors have the greatest potential to optimize the operations for short-haul destinations. The coming generation of tiltrotors will have capacity to transport up to 150 passengers  at twice the current helicopters’ cruising speed. The way a tiltrotor aircraft operates could completely change the game rules of airport infrastructure developers and it would solve some of the most challenging problems that airports face nowadays. 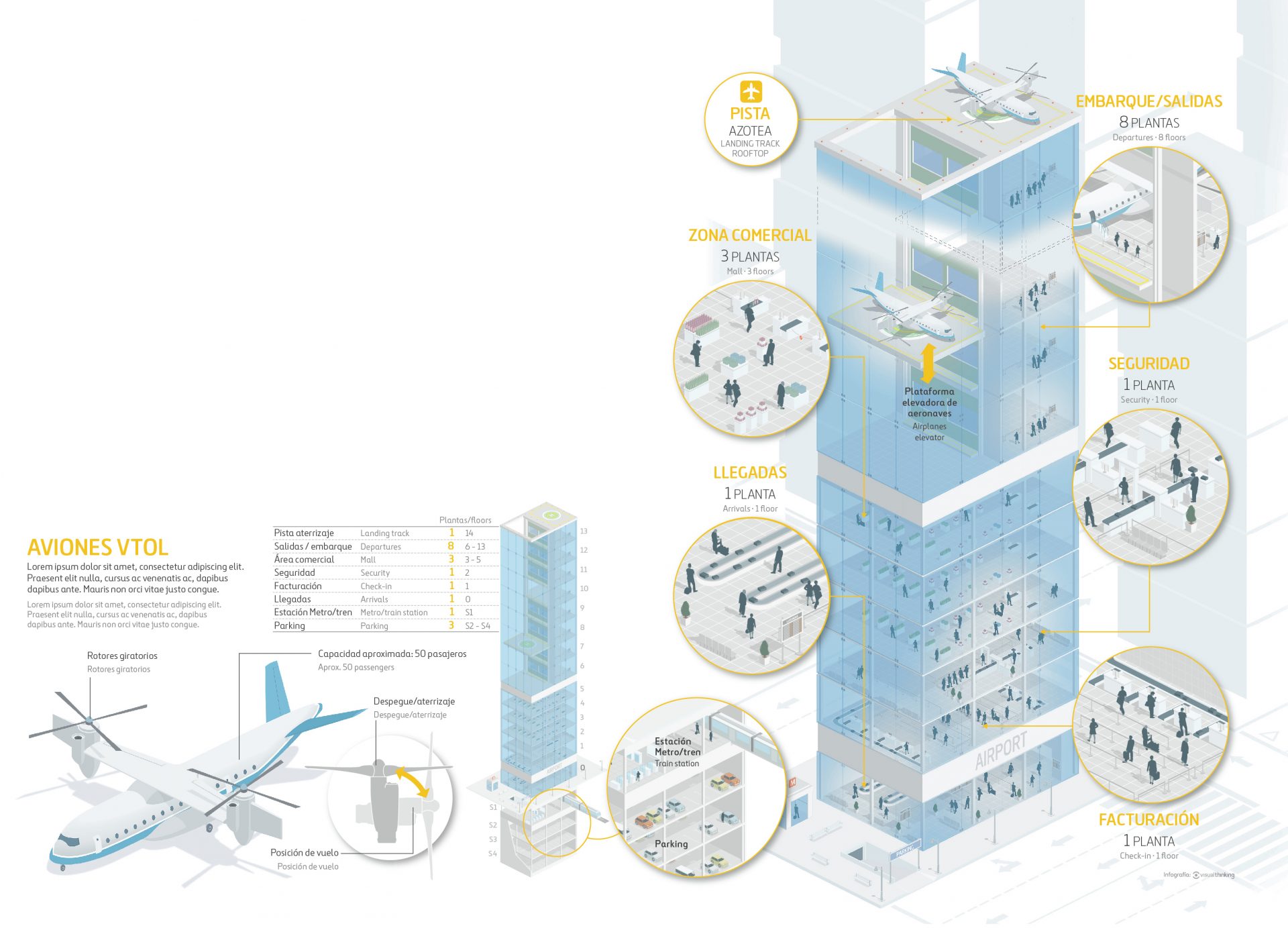 The Vertical Airport concept takes the traditional airport layout and turns it 90 degrees. The lower levels would be integrated into a ground transportation center which would include taxi, bus, subway, train and car parking facilities. As the passenger goes up the building,  there would be check-in areas, security search areas, departure lounge amenities and, finally, the airfield located on the highest part of the building.

This new model would have an associated impact that should be analyzed and considered. For example, the location of the new airport would significantly reduce transportation times for passengers to and from the airport, decrease costs to access the airport, decrease airfield operating costs or mitigate environmental impact by a reduction of car utilization. However, the proximity to the cities would also be an important aspect to be considered as it would imply potential larger consequences of an aircraft accident, the noise impact or a potential lack of space to build the airport or expand it in the future.

In any case, there is no doubt that airports have become an intrinsic component of the city infrastructure and the possibility to integrate them in the city center opens a new era in the way the airport, the airport users and the city interact with each other. The positive economic and environmental impacts of reducing journey times to and from the airport should be sufficient in order for urban planners to start paving the way for the Vertical Airport concept.

Using a passenger volume target of four million per annum (achieved by LCY in 2015) and around 35,000 aircraft movements. In terms of infrastructure, there would be a need to have around 1,200 car parking spaces, 39,000 square meters of terminal space and eight stands. A Vertical Airport building would occupy less than one hectare (compared with 40 hectares that are used by LCY), would have 17 levels and would be 135 meters high (similar to City Point Building in London).

Impact of the Vertical Airport concept