The communities of the villages of Villa María, El Pozo and San Silvestre, located in the municipality of Lebrija (Colombia) have improved their access to water through the construction of three storage tanks, the adaptation of an existing one, and the delivery of a home water purification system to each of the homes.

The project, carried out in partnership with Action Against Hunger, ends in September 2021, and is 95% complete. Thanks to an investment of 486 million Colombian pesos (just over €109,000), 350 people from 79 families will have access to clean water. The communities of the villages of Villa María, El Pozo and San Silvestre, located in the municipality of Lebrija, will be the main beneficiaries.

The associative group for the administration of water resources in order to maintain the infrastructure and operation of the constructed system has been a key part of the process. Monitoring of water quality to ensure that it is fit for human consumption complete the work on which this initiative has focused.

For Antón Maese, CEO of Concesionaria Ruta del Cacao (Colombia), “from the beginning of the project, our main interest has been environmental protection and a good relationship with the surrounding communities. To achieve this, we establish investments as part of our social responsibility, which is to improve access to and quality of water. Different investments have been made in this commitment and, during the month of September this year, we hope to deliver to the communities of Villamaría, El Pozo and San Silvestre the result of the efforts of the entire team during all this time and that this will contribute to improve their health and quality of life”.

Among the most striking unforeseen difficulties overcome in this work are the pandemic, strike and blockades that occurred in Colombia during  April and May 2021.

The main achievement of this initiative has been the participation of the members of the communities in the construction of this project, which will help to improve the quality of life of the communities.  Without this participation, the social, technical and environmental team and the Concessionaire’s management would not have been able to plan and execute the project successfully.

Donations that save lives

In the midst of the pandemic, the concession made various donations, as the lack of sanitary materials in rural areas in Colombia was a major concern. In May 2020, basic biosecurity and patient care equipment was donated to three health centres in the area of direct influence of the project: La Fortuna Health Centre and Tienda Nueva Health Centre in the municipality of Betulia and Lebrija Hospital in the municipality of Lebrija. A total of 4,700 pairs of gloves, 7,500 paper towels, 12 gallons of alcohol, 460 N95 masks, 1,200 surgical masks, 30 medical goggles, 200 anti-fluid gowns, 700 gaiters, 15 protective suits and 320 disposable caps were delivered to help medical staff in times of shortage.

Without losing sight of the citizens, a donation of sanitary material and basic biosecurity elements was also made for the health personnel and the Lebrija Municipal Mayor’s Office. A total of: 1,000 N95 masks, 200 surgical masks, 500 gaiters, 2,000 pairs of disposable alcohol gloves, 500 disposable caps, 500 disposable gowns, 100 face shields and 100 protective goggles.

In addition to the sanitary material, food kits were given to the concessionary company’s workers who are part of the group of vulnerable families. A total of 530 food kits were distributed to vulnerable families in the municipalities of Betulia, Girón and Lebrija. Donation of food to the municipality of Lebrija, which they themselves managed, organised and distributed to the most needy people. 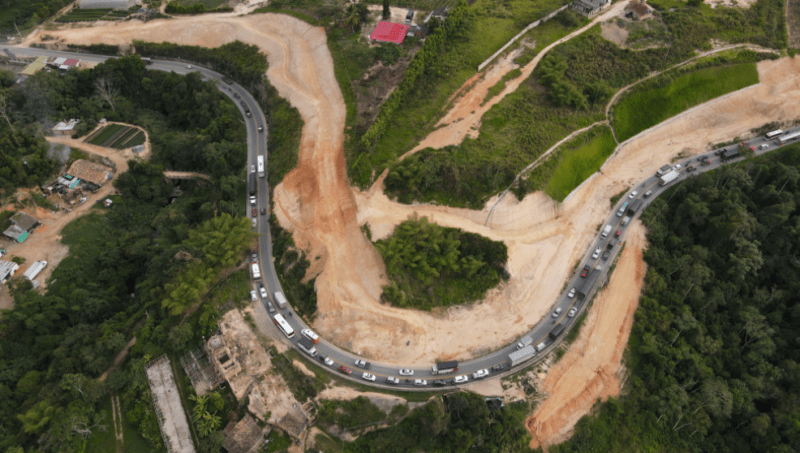 Due to the restrictions established during the pandemic, artists and cultural managers were hard hit as they were unable to carry out any of their work activities and did not receive any income. For this reason, it was also decided to support the initiative “Donación de Artistas por Santander” of the Secretary of Culture of the Government of Santander with the delivery of 104 food kits for artists, cultural managers and creators of the municipality of Lebrija.

“This donation responded to a particular and unexpected situation that required the support of everyone, prioritising the most vulnerable. It allowed us to immediately attend to the main priorities that arose around the road corridor,” explains Maese. “We did not give money, it was a donation in kind with an investment of around 50 million pesos.”

With this endowment, “health personnel can safely attend to patients with COVID 19, reducing the gap in rural areas that at the beginning of the pandemic did not have adequate biosecurity material. The food aid addressed the food needs of the most vulnerable families in the area of direct influence,” adds Maese.

Ferrovial is considered the most trusted Spanish construction company in Colombia

More than 24,000 people visited the Jose Manuel Ballester about Ferrovial

Ferrovial is considered the most trusted Spanish construction company in Colombia