Tunnelling of the new public-transport focused river crossing at Silvertown is now underway, Transport for London (TfL) and Riverlinx have confirmed.

The 1.4km Silvertown Tunnel will link Newham to the Greenwich Peninsula and provide improved bus links across the Thames when it opens in 2025. By reducing congestion at the Blackwall Tunnel, providing new cross-river bus links and creating a more reliable river crossing for cars, vans and lorries, it will support economic growth across east and southeast London. It will also provide better access to new job opportunities and support new housing and business developments across the wider area.

The project is being delivered by the Riverlinx consortium, which is made up of abrdn, Invesis, Cintra, Macquarie Capital and SK ecoplant, through a design, build, finance, operate and maintain contract. The vast majority of the funding is coming from private finance which has been specifically raised for this scheme. Construction of the project is being delivered by the joint venture bringing together international expertise from three civil engineering and construction companies: BAM Nuttall, Ferrovial Construction and SK Ecoplant.

Since construction work on the project began in 2020, a huge amount of work has been delivered to prepare for the start of tunnelling, including the delivery of the launch chamber for the tunnel boring machine (TBM), a conveyor system built to remove excavated materials and also repairs to the river wall made to ensure it is not affected while tunnelling takes place. Around 780 people are working full-time on the project, including a number of local apprentices who are benefiting from working on a major construction project in their area.

Aside from a small section around the tunnel entrances, which will be built using a ‘cut and cover’ technique, the two bores that make up the Silvertown Tunnel are being built using one 82 metre-long TBM, named ‘Jill’ in honour of Jill Viner, the first female bus driver in London. The TBM has a cutter face of 11.91m and is so large, that it had to be transported to the UK in pieces and then assembled within the launch chamber. Now launched, it will progress under the river at around 10 metres every day and once the first tunnel is completed, will then be turned around to head back to Newham and complete the second tunnel. 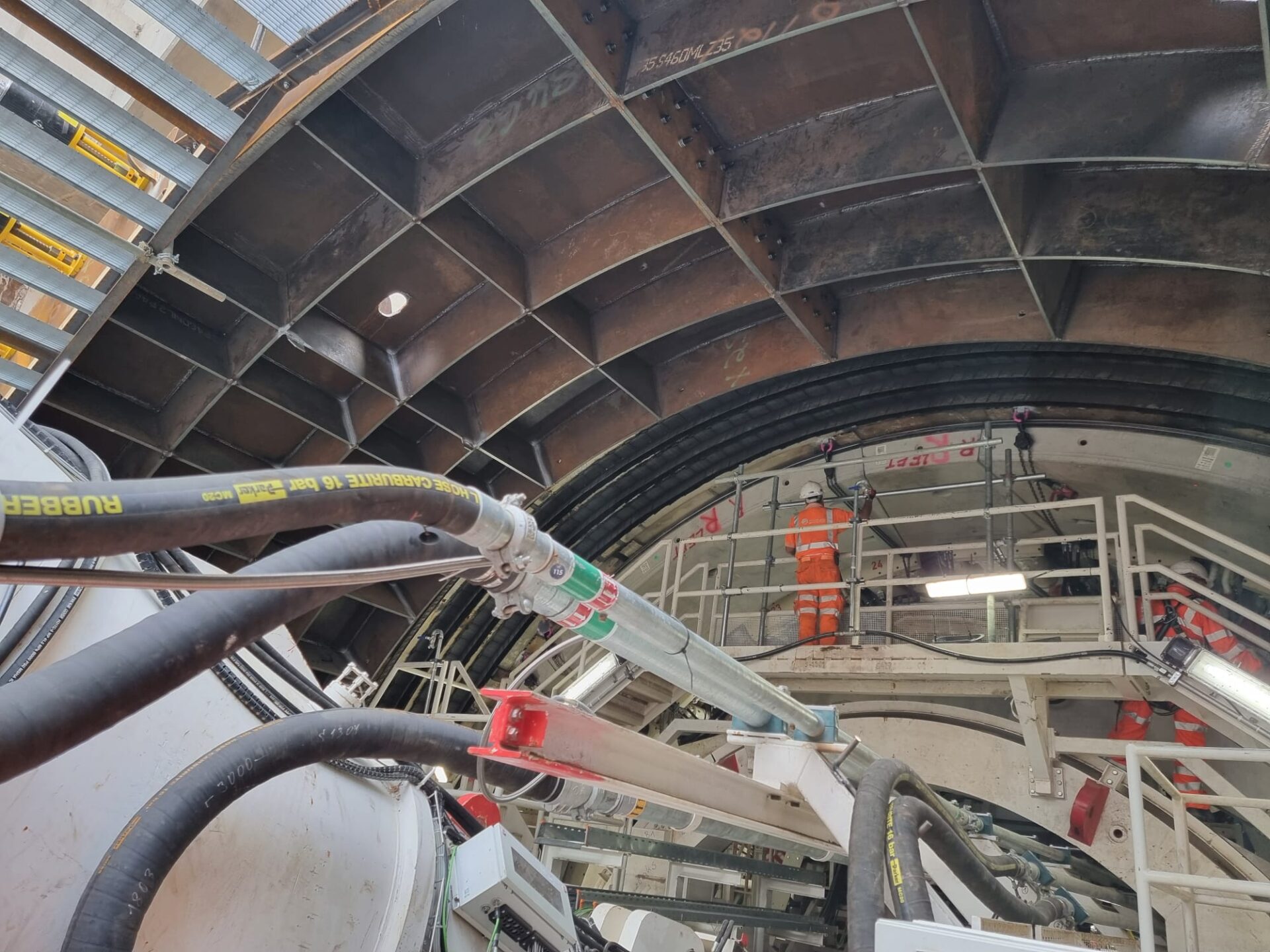 Across the course of the project, nearly 600,000 tonnes of material will be excavated and removed from site via barges along the river as part of the project’s wider commitment to keep construction traffic and associated emissions to a minimum. More than 150 barges have already been used to deliver or remove materials and waste from site, removing at least 18,000 lorries from the road. The excavated materials from tunnelling will be transported along the Thames via barge to a former landfill site in Essex as part of a restoration scheme.

TfL and Riverlinx are also actively working on the designs for the walking, cycling and landscaping improvements, which will be delivered around either side of the tunnel entrances. These will see new dedicated cycleways and footways, as well as ‘shared space’ and new public realm installed across Tidal Basin Road roundabout, which will link in with wider improvements planned by Newham Council across the Royal Docks area. The proposed landscaping around the tunnel entrances, as well as a green roof on both tunnel portal buildings, will also form part of the scheme’s commitment to environmental improvements and promoting biodiversity across the wider area.

Helen Wright, Head of the Silvertown Tunnel programme at Transport for London (TfL), said: “The start of tunnelling is a huge step forward for this project and we are committed to working hard to ensure that it is delivered with minimal impact to Londoners. As well as reducing congestion and providing better cross-river bus opportunities, the new tunnel will also help deliver a wide range of local improvements, including dedicated walking and cycling infrastructure and new landscaping. We are working actively on these designs and we hope we can share these with local residents and stakeholders shortly, ahead of starting work on them within the next year.”

John Hagan, CEO, Riverlinx, said: “The connections enabled by the Silvertown Tunnel will not only cater for existing needs but enable future growth for this area of London – access to opportunities for its growing population, and access to new markets for its local businesses, increasing the effectiveness of business operations through resilient delivery networks. Financing has made this project possible – but construction has kept it moving. The start of tunnelling is a vital milestone – an excellent one to celebrate.”

Juan Angel Martinez, Project Director at Riverlinx CJV, said: “This really is a terrific achievement which has only been made possible by the excellent effort and collaboration of everyone involved. I’m very proud of everything this project and our team is delivering, knowing how important it is to us and our supply chain to deliver the programme safely and responsibly, providing sustainable opportunities, career growth and benefits to the local communities and our people. Jill’s journey is an excellent milestone to celebrate.”

To follow progress of the TBM under the Thames, please visit Riverlinx page. For more information about the Silvertown Tunnel, pleasevisit this page.

CADAGUA is participating in the 36th AEAS Conference

I-66 project and VDOT celebrate with beam-signing ceremony

I-66 Outside the Beltway Project Reaches 91% Completion

Ferrovial employees across the U.S. participated in the 2022 St. Jude Walk/Run to end childhood cancer

Ferrovial selected to build a subway line in Toronto (Canada)

First Phase of Cintra-led $3.7 B I-66 Virginia project opens to the public