Since 2010, Heathrow has welcomed an additional 15 million passengers – an increase of 18% over the course of the decade. This passenger growth was facilitated by £12 billion worth of private investment which culminated in the opening of Terminal 2 which is now ranked by passengers as one of the best airport terminals in the world.

In the 2010s, Heathrow served as Britain’s front door for a number of nationally significant moments, such as the arrival of the world’s top athletes and many excited fans ahead of the London 2012 Olympics. The airport also celebrated a landmark anniversary, with 31st May 2016 marking 70 years since Heathrow officially became a commercial airport for civilian use.

Heathrow transformed passengers’ experience with the opening of the new Terminal 2, the Queen’s Terminal, in 2014. The terminal is environmentally friendly, powered entirely by renewable energy and is a testament to Heathrow’s ability to deliver large infrastructure projects on time and on budget. The last decade saw Heathrow deliver on its promise of being a great place to live and work, with the airport leading the way on the London Living Wage accreditation and supporting many young apprentices from the local area in their training and career development. The decade concluded with Parliament making a landmark decision that would transform the airport’s future, as MPs overwhelmingly voted in favour of expansion.

Over the past 10 years the groundwork was laid for the airport’s environmental goals, with the unveiling of Heathrow 2.0, its sustainability strategy in 2017 and £100 million of investment which funded the airport’s pledge to ‘Go Electric’ with the EU’s biggest electric fleet, the peatland restoration carbon offsetting project and the centre of excellence for sustainability. Our Fly Quiet and Green league tables revealed that more airlines are operating ultra-quiet and green 787s and A350s, partly in response to environmental pricing incentives.

Regarding 2019, a record 80.9 million passengers travelled through the airport this year, delivering the ninth consecutive year of growth for the airport. This passenger growth was driven by larger and fuller aircraft.

Heathrow Terminal 5 was voted the ‘World’s Best Terminal’ at the 2019 Skytrax World Airport Awards for the sixth time in the terminal’s 11-year history. Terminal 2 followed closely behind as fourth-best globally. Overall, Heathrow maintained its position as one of the top 10 airports in the world.

In June, the airport unveiled its preferred masterplan for expansion. The plan sets out how the expanded airport will be operated and provided local residents with information on new measures to reduce congestion and emissions as well as a ban on scheduled night flights. 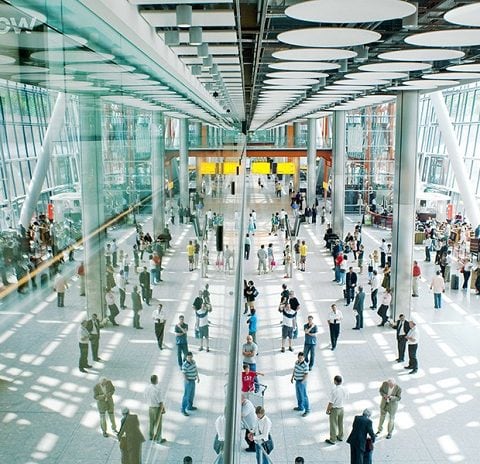 Finally, looking into December 2019, Christmas and New Year reunions fuelled passenger growth this month. More than 6.7 million passengers travelled through Heathrow during the festive season, making it the airport’s busiest December ever, up 3.1% compared to the same time last year. This was also the strongest monthly increase recorded for 2019.

UK services saw the biggest surge in December (+10.6%) as many took advantage of Flybe’s routes to Newquay and Guernsey during the holiday rush. British Airways also increased the frequency and aircraft size of their Scottish flights, allowing even more passengers to take part in Hogmanay celebrations. The Middle East saw growth of 7.3%, likely boosted by fans flying out to Qatar to watch Liverpool win the FIFA Club World Cup. This was followed by the US (+7.1%), as many took advantage of new services to Pittsburgh, Las Vegas and Salt Lake City.

Heathrow submitted an Initial Business Plan to the CAA showing how the airport will deliver expansion and connect all of Britain to global growth. The plan will mean lower fares for passengers with new capacity and shows how expansion is sustainable, affordable, financeable and deliverable.

“The past decade has been transformational for Heathrow and the investments that we’ve made in our infrastructure, our people and our processes are paying off for passengers. But it doesn’t end there. By the end of this new decade of delivery, a third runway will have given Britain more hub capacity than our rivals in France or Germany, making this country a winner and the best-connected country in the world. Regular, direct flights to all the major cities in the US, India and China – the great economies of the 21st Century – will put all of Britain at the heart of global trade and we look forward to delivering this economic growth in a way that aligns with the Committee on Climate Change’s net zero 2050 target.”